“Comedian” Adam Carolla made some racial remarks on his podcast about the Philippines when a caller asked him about Philippine world champion boxer Manny Pacquiao.

“…he’s, ya know, praying to chicken bones and stuff like that.”

“Here’s how you know your country doesn’t have a lot going for it: when everything is about Manny Pacquiao.”

“Get a fucking life as a country.”

“All you fucking got is this illiterate guy who won’t give up blood who happens to smash other guys in the head better than other people?”

“They got this and sex tours. That’s all they have over there. Get your shit together, Philippines. Jesus Christ.”

There’s more and it gets worse but you get the picture. If you haven’t heard the original remarks you can cringe here:

(to hear all the original remarks first, scroll to the bottom)

“Here’s how you know your school doesn’t have a lot going for it: Because everything is about basketball!”

“Get a fucking life as a school. Is all you fucking got these skinny white guys, who happen to put an orange ball into a hoop better than other people? And be a top 10 national university? That’s all you have?!”

“That’s it. I say get a life. Don’t live vicariously through some dude who’s been to like, 11 final fours, won 4 national championships and a gold medal. What does that prove? I can’t even say his name: Zysweski? Potesky? Roman Polanski? They’re all child molesters at Duke!”

Carolla thinks Duke is gay. He doesn't like gays either.

“That’s the beauty of my career. I got way to much shit going on and other more talented people to leach off of that I couldn’t possibly leach off just one. Or base my existence off of an education. I was in one episode of “Son of the Beach” called “Penetration Island” for crying out loud!”

“Hey I’m not racist. I try to be provocative, funny. I got way to much shit going on than to build my entire existence being racist against educated white guys. Like being racist against chinks, porch monkeys, spics, wops, kikes. You’re racist against one group then move on. You’re like, hey the Academy Awards are on. But its not like its all white people! Oh wait….um, anyway… Get your shit together, Duke! Jesus Christ!” 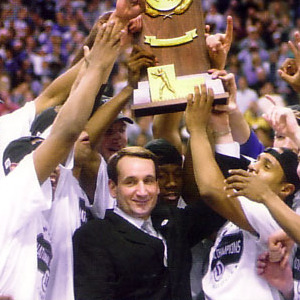 Carolla thinks these white guys need to get a life. National championship trophy? Is that all you got?

“Do they have sex tours there? At Duke? Was it Duke or Thailand? I’ve heard about sex but never had it. Except with those farm animals once. But that chicken was asking for it. Then I ate her and worshiped her bones. Gave the term “eating her out” a whole new meaning, heheh. What? Oh I’m creepy? Duke’s coach is a child molesting film director and I’m the creepy one?”

“Look, I’m sorry if I offended you. But I’m not racist. Its not like I go on a racist tirade because I’m going to get more publicity from it than anything that’s happened in my career the last 10 years. Oh wait….um, anyway… Get your shit together, Duke! Jesus Christ!”

“By the way, I think Coach Kris Kringle Polanski is a wonderful mother. For a white guy.”

EDITOR NOTE: To his credit, Carolla issued an apology to a nation of 90 million via twitter.